Being Dead Is No Excuse: The Official Southern Ladies Guide to Hosting the Perfect Funeral (Hachette Book Group) by Gayden Metcalfe and Charlotte Hays 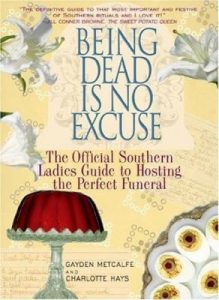 Metcalfe, a lifelong Southerner who’s been hiding out in the social circles of Greenville, Miss., exposes the culinary and cultural last rites of the deep South in a fashion that is as sidesplitting as it is politically incorrect, as sincere as it is back-stabbingly brutal. –Publishers Weekly Starred Review

If you want a good laugh in this uptight, power-obsessed city, pick up a copy of Being Dead Is No Excuse. And if you are a Southerner, you will laugh until the tears come.– Washington Post