The Earth Is Weeping: The Epic Story of the Indian Wars for the American West (Knopf) by Peter Cozzens 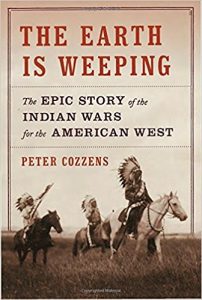 Winner of the Gilder Lehrman Prize for Military History and the 2017 Caroline Bancroft History Prize; Finalist for the Western Writers of America’s 2017; A Times "History Book of the Year" and A Smithsonian "Top History Book of
2016"; Shortlisted for Military History Magazine's Book of the Year Award; Spur Award in Best Western Historical Nonfiction

[S]ets a new standard for Western Indian Wars history… [T]he most comprehensive, insightful synthesis of the conflict between the Western tribes and the United States government and citizens published by a popular New York press in decades… [S]uccinctly
seeks a sharper understanding of the cause and effects of the American government’s policies, citizen relations with the tribes, intertribal history and warfare, and the United States’ massive immigration into the West during and after the Civil War.—Stuart Rosebrook, True West Magazine
http://www.petercozzens.net