The Great Divide: The Conflict between Washington and Jefferson that Defined a Nation by Thomas Fleming (Da Capo) 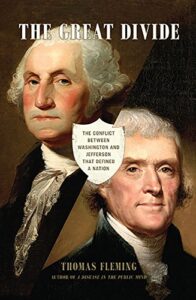 Prolific historian Fleming delivers a vivid, opinionated history of this conflict…. and a fascinating case that Jefferson’s charisma which peaked early with the Declaration of Independence was accompanied by fanciful political beliefs that continue to exert a malign influence on the office of the presidency. –Kirkus Reviews

Fleming looks beyond the standard history of the founding and early years of the nation to detail  he contrasts in the backgrounds and personalities of these men [Washington and Jefferson]. A fascinating look at American history from the perspective of personal relationships and political  deals.–Booklist, starred review
http://thomasflemingwriter.com/