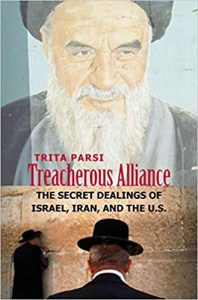 Winner of the Grawemeyer Award for Improving World Order

“A penetrating, provocative, and very timely study that deciphers how U.S. policy in the Middle East has been manipulated both by Iran and by Israel even as relations between these two oscillated between secret collusion and overt collision.”– Zbigniew Brzezinski, former US National Security Advisor to President Jimmy Carter

“In Treacherous Alliance, Trita Parsi makes a persuasive case that Iran has consistently used ideology to achieve hardheaded national interest objectives, rather than sacrifice national interest on the altar of extremist ideological goals. This work, based on extensive interviews with decision makers in three countries, contributes both to our historical understanding and our current policy debate.”–Francis Fukuyama